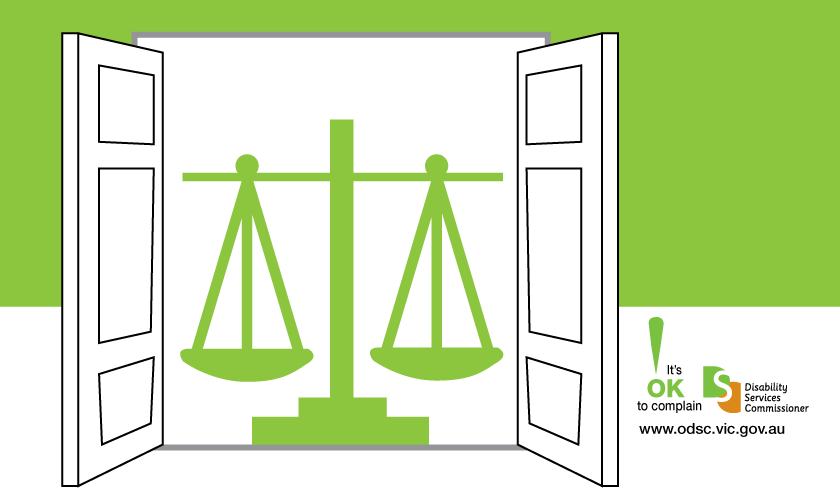 The Disability Services Commissioner (DSC) has been working with Victoria Police to promote the fact that everybody has the right to access the justice system. This means that if someone with a disability has experienced abuse or another criminal act, they have the right to have the issue reported to Victoria Police, and to have a person support them to make a report.

Disability service providers have an obligation under their funding agreements to report critical incidents involving clients to the Department of Health and Human Services (DHHS), and in criminal matters, to Victoria Police as well.

In addition to DSC oversight of Category 1 critical incidents, when DSC receives a complaint that has a criminal element, DSC will work with Victoria Police where appropriate. For instance, someone might make a complaint to DSC about an assault. DSC will facilitate that report to Victoria Police who will investigate the assault while DSC will consider actions by the service provider to see:

The following story* demonstrates how everyone has the right to access the justice system, regardless of their disability or history.

DSC spoke with Steve’s service provider, and found that they hadn’t followed up on Steve’s allegations of assault. Only Steve’s first allegation was reported to Victoria Police and DHHS.

As a result of Steve’s complaint, the service provider commenced following up on the earlier incidents, reviewed their incident reporting processes and trained staff in reporting incidents both to DHHS and Victoria Police. They also worked with Steve to review his support plan to ensure that it clearly documented Steve’s needs, preferences, and goals.

Steve told us that his supports were working much better for him. He also felt more confident about the service provider helping him, and other clients, to access the justice system if required.

Speaking up about abuse and neglect can make a difference. It helps people with disability access the justice system, it holds people to account if they have been the perpetrator of abuse, and it can help disability service providers improve their policies, procedures, and staff training.

Everyone deserves to feel safe where they live, where they work, and where they do activities. We all have the right to access the justice system.