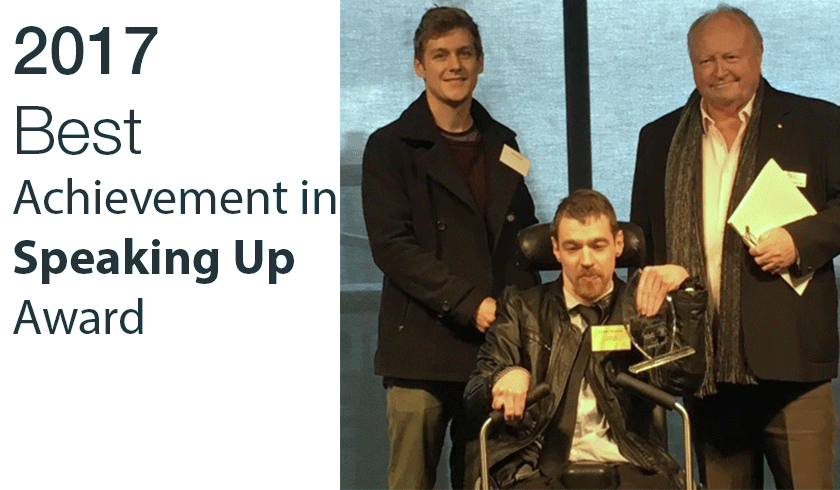 The Disability Services Commissioner, Laurie Harkin AM, was pleased to present the 2017 Best Achievement in Speaking Up Award at the Funds in Court Inspire Awards to Brendan McCarthy.

As part of the Changing Places advocacy project, Brendan has advocated for local councils, developers and facility managers to develop toilet and change rooms facilities with full sized change rooms and hoists to meet the needs of people with disabilities. Brendan has been the campaign face and attended meetings for Changing Places since 2010 where he has lobbied to change building standards. Brendan has also been part of opening new accessible change room facilities at the MCG, St Kilda foreshore and recently at Melbourne Zoo.

Brendan’s latest project is a campaign for Chadstone Shopping Centre to build a Changing Places facility. Having an accessible changing facility in the centre would allow him and many other people to increase their time socialising, going to the movies and shopping.

Over time, Brendan’s confidence, self-esteem and his capacity to speak up about issues of importance to him has grown immensely. Brendan’s experiences and his enthusiasm to gain knowledge have empowered him to present to community and disability groups about the importance of the Changing Places program. He has presented to community groups such as Uniting Care, Interchange, VALID’s Self-Advocacy Network and VALID’s ‘Having a Say’ conference. Brendan has become a role model not only to others with cerebral palsy but to all members of the community.

Mr Harkin AM said, “Brendan’s accomplishments in Speaking Up show that when the community truly listens to the voices of people with disability, lasting positive change can happen. His achievements in creating more accessible community spaces have made and will continue to make a big difference to Victorians living with disability. Congratulations Brendan.”

For more information about the Inspire Awards, visit: http://www.supremecourt.vic.gov.au/home/contact+us/news/funds+in+court+inspire+awards.