Review of disability service provision to people who have died

On 28 June 2019, the Minister for Disability, Ageing and Carers (the Minister) extended the referral until 30 June 2020, in recognition that there remain people with disability in Victoria that are yet to transition to the NDIS and still receive disability services funded by the Department of Health and Human Services (DHHS).

We conduct our  investigations into disability service provision to people who have died under s.128I of the Disability Act 2006 (Vic) (the Act).

The inaugural review conducted by the Disability Services Commissioner was tabled in Victorian Parliament on Wednesday 19 December 2018. This work has not previously been performed in Victoria. 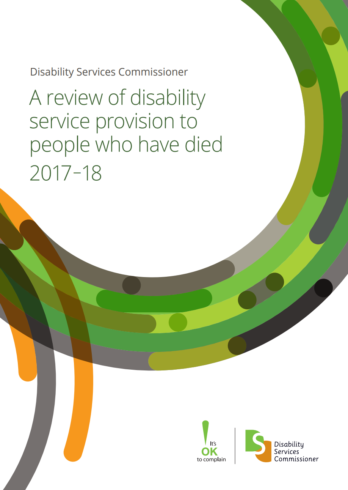 This is a supplementary document produced for the 2019 National Disability Services Victorian State Conference. 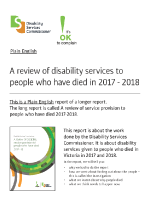 During 2017–18, we received notifications from the Department of Health and Human Services (DHHS) and the State Coroner of deaths of people with disability.

The outcomes of this work are relevant for all disability service providers, not just those subject to our investigations and Notices to Take Action.

The report should inform the implementation of the NDIS, particularly with a focus on appropriate assessment and planning for people who require communication, dietary or mealtime assistance.

We also expect all service providers to respond to this report by increasing their focus on identifying and implementing appropriate supports for people with disability receiving their services.